How do you have fruitful faith? 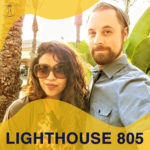 Lighthouse 805
How do you have fruitful faith?

Is your faith genuine or fake? Real fruit or fruit flavored? Can it give nutrition, reproduce? Or does it rot over time, go stale? We’re continuing our deep dive into FAITH, in this message of our Faith Check series – Fruitful Faith.

After Jehoiachin son of Jehoiakim king of Judah and the officials, the skilled workers and the artisans of Judah were carried into exile from Jerusalem to Babylon by Nebuchadnezzar king of Babylon, the Lord showed me two baskets of figs placed in front of the temple of the Lord. 2 One basket had very good figs, like those that ripen early; the other basket had very bad figs, so bad they could not be eaten.

3 Then the Lord asked me, “What do you see, Jeremiah?”

“Figs,” I answered. “The good ones are very good, but the bad ones are so bad they cannot be eaten.”

4 Then the word of the Lord came to me: 5 “This is what the Lord, the God of Israel, says: ‘Like these good figs, I regard as good the exiles from Judah, whom I sent away from this place to the land of the Babylonians. 6 My eyes will watch over them for their good, and I will bring them back to this land. I will build them up and not tear them down; I will plant them and not uproot them. 7 I will give them a heart to know me, that I am the Lord. They will be my people, and I will be their God, for they will return to me with all their heart.

8 “‘But like the bad figs, which are so bad they cannot be eaten,’ says the Lord, ‘so will I deal with Zedekiah king of Judah, his officials and the survivors from Jerusalem, whether they remain in this land or live in Egypt. 9 I will make them abhorrent and an offense to all the kingdoms of the earth, a reproach and a byword, a curse and an object of ridicule, wherever I banish them. 10 I will send the sword, famine and plague against them until they are destroyed from the land I gave to them and their ancestors.’”

Let’s talk about this Bible verse not only as the state of the church in corona time – but also as believers in new seasons.

In this story there are 3 groups of believers:

So how do we develop faith like the believers that move into new seasons and trust Jesus?

People were exiled from their homes. They needed to build a new home. Don’t sit around waiting to get back to normal. This is your new normal.

When we build, we work on our faith and our trust. God will build us up and will not tear us down.

When we enter new seasons we need to build and not lament.

To set down roots in a new season. Roots represent a source of life. People did not leave when God told them to leave. They thought their source of life was connected to the routines and city they lived in rather than God.

The soil determines the growth of the plant. The root pulls the nutrients from the soil and the plant grows. Jesus is the root, but your season determines your growth.

Some of us are stuck in past seasons. All the nutrients have already been used. Jesus, the root, is telling us to move to the next season for new growth.

We need to move to the next season – mentally, physically and faithfully.

God’s desire is for us to connect to Jesus more that we connect to soil. Meaning – connect more to what Jesus is doing right now and right here; than what He did back then.

Complaining and grumbling is failing to see Jesus in this season.

Xerox had the most successful single product of all time. They revolutionized businesses and homes.

They had ground breaking research; but the people in charge decided it wasn’t for them and gave all the technology to Steve Jobs. Xerox had the future in its hands, but the ownership thought it was meant for someone else.

Xerox is like a lot of believers… Reading the Bible and thinking it’s not for me its for someone else.

Jesus is speaking – are you listening to grow?

When we fail to pivot into new seasons there are consequences.

3 core consequences from Jeremiah 24:10 as illustrations on this side of the cross and new covenant.

Let go of 1 thing from a past season. Maybe it was a glory that was awesome but God is calling you to a new glory. Maybe it was something tragic, and you have been holding onto that pain.