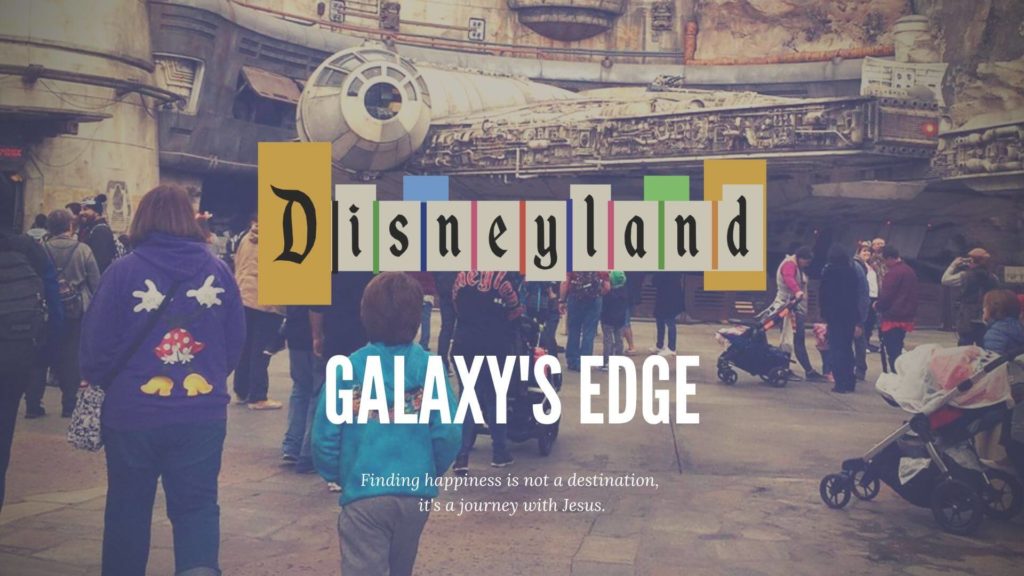 A long, long time ago in a nation far, far, away… God gave a promise to a man named Abraham. He called him from the nation he lived in to a new land with the promise of a new son. The Lord of Lords, King of Kings, who sits on His throne is still calling. A new adventure awaits us at the Galaxy’s Edge.

This begins the next episode in our Happiest Place on Earth series at Ventura Lighthouse Church.

1 – Smugglers Run
Genesis 15  After all these things, this word of God came to Abram in a vision: “Don’t be afraid, Abram. I’m your shield. Your reward will be grand!” 2-3 Abram said, “God, Master, what use are your gifts as long as I’m childless and Eliezer of Damascus is going to inherit everything?” Abram continued, “See, you’ve given me no children, and now a mere house servant is going to get it all.”7 He also said to him, “I am the Lord, who brought you out of Ur of the Chaldeans to give you this land to take possession of it.”8 But Abram said, “Sovereign Lord, how can I know that I will gain possession of it?”
A – What We Have
B – What We Don’t Have
C – What Others Have

2 – Building A True Lightsaber
Hebrews 4:12 For the word of God is alive and powerful. It is sharper than the sharpest two-edged sword, cutting between soul and spirit, between joint and marrow. It exposes our innermost thoughts and desires.
James 2:23  And so it happened just as the Scriptures say: “Abraham believed God, and God counted him as righteous because of his faith.” He was even called the friend of God
A – Believe
B – Follow Through
C – Personal

3 – Life At The Cantina
Genesis 18  The Lord appeared to Abraham near the great trees of Mamre while he was sitting at the entrance to his tent in the heat of the day. 2 Abraham looked up and saw three men standing nearby. When he saw them, he hurried from the entrance of his tent to meet them and bowed low to the ground.3 He said, “If I have found favor in your eyes, my lord, do not pass your servant by. 4 Let a little water be brought, and then you may all wash your feet and rest under this tree. 5 Let me get you something to eat, so you can be refreshed and then go on your way—now that you have come to your servant.”“Very well,” they answered, “do as you say.”6 So Abraham hurried into the tent to Sarah. “Quick,” he said, “get three seahs of the finest flour and knead it and bake some bread.”7 Then he ran to the herd and selected a choice, tender calf and gave it to a servant, who hurried to prepare it. 8 He then brought some curds and milk and the calf that had been prepared, and set these before them. While they ate, he stood near them under a tree.